With the increasing demand for digitalization in almost all spheres and huge apartments being located at heights, a wifi extender has become more important than ever.If you looking best wifi 6 for 4k streaming and gaming than your searching is end here

So today we’re finally going to check out the TP Link Archer AX73, and I really think that this is one of the best affordable high performance Wi-Fi 6 routers, even at 10,000, which is kind of on
the higher side.

Hey guys I am Sanjay, and this is the there is Inside the very smart looking box of the AX73, you get a quick start guide with some other papers, you get a 30 watt power adapter which is quite interesting, you also get an ethernet cable, and then finally you get to the router
from which you will have to peel all the plastic. The AX73 has a really mature design, the 3D
pattern on the top and on the wall mountable bottom of the router looks really tasteful,
and it also adds a lot of ventilation to this. I don’t even mind the glossy part on top,
and the size of the router is also a little bigger than usual, which makes it look cool
and high end. We have 6 removable antennas on this,

so you
can really place them in different axes, and the green LEDs for different statuses on front
don’t look that premium, but at least their low brightness doesn’t hurt your eyes. At the back, we have a dedicated button to turn LEDs off, along with the WPS, Wi-Fi, and Reset button. Then we have 4 gigabit LAN ports, a gigabit WAN port, and the power socket and button. We also have a USB 3.0 port on the side, which I like the position of, because you won’t have to find it at the back of the router, which can be a problem because we know how USB A only gets inserted properly on the 3rd try.By now you must already know about the advantages
of Wi-Fi 6, Orthogonal Frequency Division Multiple Access is of course the hottest topic
of discussion among the cool kids, and features like Client Scheduling and other tech stuff
will help when you have lots of devices connected in a busy wireless network area, and you may
also get lower latencies while gaming over Wi-Fi. The AX73 has a Triple Core CPU, support for
160 MHz width, and it is a (Text: AX50 was only 2 x 2 MU-MIMO) 4 x 4 MU-MIMO router, 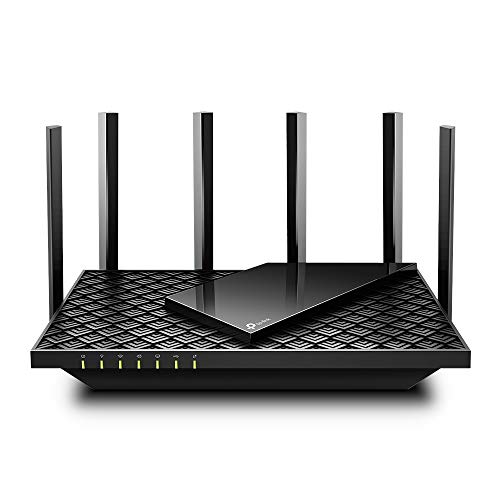 which can help a lot with the speeds. TP Link’s web interface is quite easy to
use, and it offers a lot of features in its advanced mode. You can enable LACP Link Aggregation for even higher speeds by combining two LAN ports, we have support for VLAN, you can create a
Guest network and the router has WPA3 security available. You can of course share the files on a USB drive or on a hard drive on the network by connecting it to the USB port, and if you’re
a MAC user, you can also back up your files with support for Time Machine. I tested the performance on the USB port by connecting a hard drive, and I was able to get around 100 megabytes per second, which is the limit of the Gigabit WAN port, and on this router. The router has a built in firewall, and you can also block access to specific devices. Then we also have support for OpenVPN and PPTP VPN. The AX73 also supports Onemesh, which means
that if you have one of their range extenders, you can create a mesh network, and I’ve
been using this with my RE505x in a mesh network, and it works really well. I have two flats, and the range extender is in the second one, so when I move between flats, my phone automatically switches between router and range extender while staying connected to the same SSID. It doesn’t increase the speed, but it adds a lot of convenience. That being said, the router itself cannot be used as a range extender, which is a feature that you do find on Asus routers, but I will
discuss more on that later. Now one thing I didn’t talk about is that this router has combined the parental control and Quality of Service features into their Homeshield service, and to enable all the advanced features, you have to subscribe to their Homeshield Pro service, and that is quite expensive at 550 Rs. monthly in India, so I don’t think anyone would be subscribing to that. But even without paying, you can access the necessary parental controls and QoS features, and I don’t think that the extra features that you get with the paid subscription are really worth it. I tried their weekly reports and device insight, and it works fine but it’s not that useful, and I just found myself turning off those notifications. The Homeshield Pro service also offers something
called IoT protection, and allows you to set off time for parental controls, and some of
these features are available on other routers without a paid subscription, but a lack of
these advanced features isn’t something that I consider to be a big deal. But one thing I disliked about this whole system is that you cannot access these QoS and parental control settings from the WebUI, and you have to access these settings through their TP Link Tether app. It is a very small inconvenience, and I don’t think most people would even use these features, but I just find it dumb to have some features only accessible on the mobile app, and not on the web interface. But the TP Link Tether app itself works really well, and you can access most of the features of the web interface on it, and it is quite easy to use, and you can also control your router when you’re not connected to your local network with TP Link Cloud, so all that is something that I really appreciate about the TP Link ecosystem. Alexa integration is also available on this
router, so you can also use voice commands to do things like enabling or disabling guest
network. Do give this video a thumbs up if you’ve been liking it so far, and I also have some exciting stuff coming up next so you can also subscribe with bell. But now let’s finally talk about the performance.

and that is really amazing with the Archer AX73, as I was able to get almost 900 mbps
on 5 GHz with my ROG Phone 3 very close to it, while in the room next to it, the speed
was still almost the same at around 862 mbps. Even in my company office with multiple walls
in between, this delivered 531 mbps, which is a really great result. On 2.4 GHz the performance is what you would expect, but since this router also has Wi-Fi 6 on its 2.4 GHz band, you can get around 200 mbps, which is almost double of what you could get with Wi-Fi 5. The range of the AX73 is also above average, and it is better than TP Link’s cheaper routers, so for a single flat or home, this should easily cover it as I was also able to get a usable signal in my 2nd flat. controls, and statistics of your network activity, and you can even do things like making the router download torrents on a pen drive directly, and you can share those files on the cloud to access anywhere. Asus’s mesh solution also works with their other AiMesh routers instead of requiring you to purchase an extender from their company, and you can also use the Asus router itself as a range extender, which is not possible with the Archer AX73. , while the AX73 comes at almost its price, so for people who don’t need those advanced features, the AX73 is a really great value. The AX73 is also much better than the Archer AX50, which is only slightly cheaper, because that router didn’t perform as fast, its USB port was very slow in comparison, it didn’t support Onemesh, it only had 2 x 2 MU-MIMO instead of 4 x 4 MU MIMO, and it got very hot. The AX50 will still work well for most people, but I really think that it is completely worth it to spend a little more and get the AX73, as it is a much better router overall. So now that I have compared the AX73 to more expensive routers, and less expensive routers.

I hope that it must be clear why it is a really
great value at its price tag. The performance is really great, the USB port is fast, it looks great and stays cool, and its feature set will also be good enough for most people. Having a dedicated range extender mode, and a better implementation of Homeshield would have been nice, but I don’t think this will be an issue for most people, so with all that in mind, I really think that the AX73 is the best affordable Wi-Fi 6 router on the higher end that I’ve tested yet, and I’ll have
links in the Post description if you want to buy this or check its current price. and you can also let me know what you thinkmabout the AX73 in the comments section below.

All things considered, the price range is appropriate. You’re almost certainly capable of buying a decent best router for 4k streaming 2021 under 10000. However, you will need to keep in mind that it’s always prudent to compare the deal to the competition. You are highly advised to compare all the options that you have. Author Bio: Sanjay Dhariya is a professional blogger and an aspiring content writer.

If You looking best laptop under 40000 than click here